But one thing I am free from…. the overwhelming and overpowering need and want to die.

Each year that passes gives me more strength for the next year.

But I’ve been strong.

No one can take that away from me.

Here’s to writing something new next year.

People can judge us. They can slander our name. They can look down on us because we’re different than them… but they can’t take our soul. They can’t take our voice. They don’t know our lives or how we live, why we do the things we do. What we have fought for up until this very moment.

I should have died 5 years ago, but it was like an actual hand pulled the gun away from my head and a voice told me to call my mom. And life got better. It didn’t get perfect, and sometimes it doesn’t feel easier. But I promise you, it’s worth it. You’re worth it.

Stay alive for me. Stay alive for your pets, your parents, your siblings, your job, whatever it is. But most of all, Stay Alive for yourself. Give yourself the chance to experience new things. You are loved and you are worth taking up space in this world.

I never thought I’d ever be able to go to college. People (mostly classmates/bullies) always told me I was stupid because I didn’t talk until the 8th grade. They told me I’d never be able to do certain things because I didn’t talk. They told me I was ugly, stupid, mute, castoff… Teachers didn’t want to help because I was too much work, guidance counselors sent me to the school nurse and even therapists, doctors said “well she just needs to talk.” I had a teacher even send me to the principal’s office because I was too terrified to answer her question in front of the class.

I wasn’t supposed to be happy. That’s what everyone wanted. They enjoyed seeing me fail because it made them look better. It made them feel better when I would cry in front of the class. I caused people frustration, people took offense, they called me “their special project” and didn’t mean it in a good way…

I’m a junior in college. I’ll be a senior in April, and I’ll be done with my Bachelor’s degree program in November 2020. I’m proving so many people wrong and I have no plans to stop.

Yeah I’m in therapy every week, I’ve been to a mental institution a couple times, so what? It helps me. Those things helped make me strong and I live now for myself. For my dog. For those drives in my Jeep. For the day I can say I graduated college and made my parents proud.

And that is why I continue to fight.

Don’t give up hope. The battles you’re fighting today will make you stronger in the future. 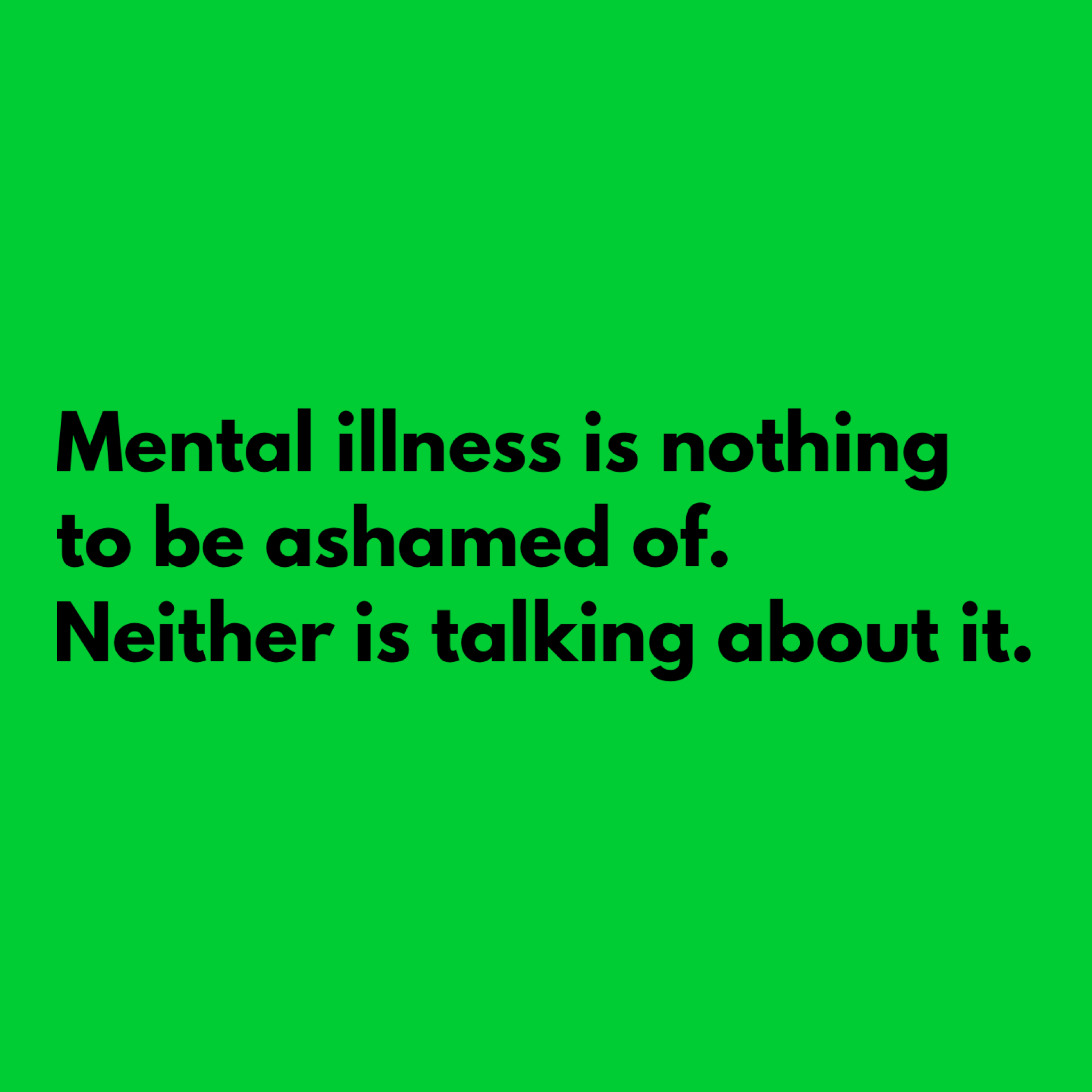 We absolutely have to. Innocent people are dying because of mass shootings, more in the United States than anywhere else, because we’re simply not doing anything about it.

It’s so difficult to find a therapist and/or psychiatrist anywhere you go and if you do find one, they charge an arm and a leg.

It’s beyond time to fix this.

Get people the help they need.

Stop spreading the stigma surrounding mental health because YOU are making it worse.

YOU are making people feel ashamed of getting and asking for help.

Mental health is just as important as physical health, my friends. Normal, stable people don’t go around making plans to kill innocent people in public places where they should feel safe.

The thing that gets me is that someone can be mentally ill, and people look down on them for that, which by the way is something they may not even be able to control. Then when that person asks for help, they get called crazy, they belong in the “looney bin” etc.

Someone is addicted to drugs, and they are looked down upon, and if they decide to detox, they get called crazy and a “crazy addict.”

The stigma that you’re spreading is making people feel like it is looked down upon to get help. They feel like they are worthless for going to a mental institution or going to therapy. They feel ashamed. They feel worthless. And that’s the opposite of how they should feel.

People that don’t get the help they need turn to more extreme ways to deal with their pain; murder, in this instance.

Mental health is what we need to be talking about. As much as gun control sounds like the issue that needs to be addressed (and in some ways, it is), we have to focus on mental health as well.

The country as a whole is shoving it off to the side. Mental health only matters on certain days of the year, then the very next day nobody cares about it anymore.

Stop shoving it off to the side. Talk about mental health. Stop making people feel worthless for having to go to therapy. There’s nothing wrong with going to therapy!!

Be open. Share your story. You might be saving someone’s life. Stop condemning people for going to therapy.

That family member or friend that refuses to go to therapy? Talk with them. Don’t give up on them, and more importantly, do your best to keep an eye on them. They may be needing and wanting to ask for help, but they’re too ashamed to.

We have to do better, my friends.

Depression is real. Mental illness is real. Addiction is real (and is a disease, by the way).

If you’ve never experienced it, that’s great! But that doesn’t mean it’s not real or that you should talk down to people who battle with it daily.

To those in El Paso, TX and Dayton, OH. You’re in my thoughts and prayers tonight.